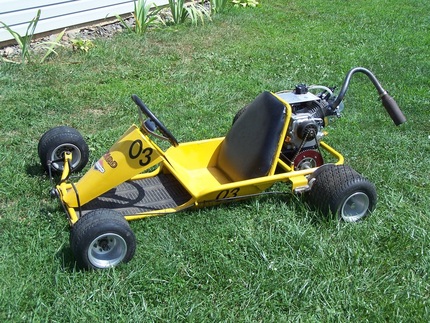 This is where Karting began.  This is a 1957 Rear Engine Racer built by AlleyCat.  Karting began in California in 1957.  AlleyCat and Rupp were the first two companies to design an actual racing chassis.  This kart was designed back in the day of inception with a Mac 93 two cycle engine on it.  Karting was first organized as  the International Karting Federation. (IKF).  As karting moved east another sanctioning body was born.  They were called World Karting Association. (WKA)  I purchased this Kart in 1981.  I raced the kart for the first time with a 5 horse Briggs and Stratton Flathead engine running alcohol as a fuel.  Many, many races and track championships won on the Kart.  As time has evolved, you will notice the engine on the Kart in this picture is of the newest racing engine called the clone.